Anthropogenically driven climate change is projected to influence a vast number of species. Of particular concern to oceanic acidification and ocean warming are the red calcifying macroalgae, Corallina officinalis. Due their vulnerability to climate change and ecological importance within marine ecosystems, there is a need to develop genetic markers to assess the conservation status of this species by identifying adaptation ‘hotspots’ and potentially vulnerable populations to climatic changes within the ocean. In this study, genetic markers were developed for populations of C. officinalis from across the northeast Atlantic (Spain, UK and Iceland) to examine the genetic structure across a large spatial scale. 12 SNPs were sequenced from the nuclear genome of 190 individuals, across 5 different sites from the northeast Atlantic. Pairwise Fst revealed fine-scale structuring between Kent populations of C. officinalis and Wembury point, which is most likely due to numerous physical and oceanic barriers within the English Channel which is constricting admixture. In addition, Icelandic populations were shown to be genetically similar to Spanish populations, despite their large geographical distance, which could be attributed to a shipping-mediated colonisation event that occurred post Last Glacial Maximum (LGM; ca. 21 KYA). DAPC analysis and heterozygosity within populations uncover how C. officinalis’ phylogeographic history was shaped by the LGM. There is supporting evidence for a glacial refugium for C. officinallis during the LGM with high heterozygosity and genetic isolation within Wembury Point, supporting the putative Brittany/ English Channel refugium. In contrast, there is evidence conflicting the general premise of an Iberian Peninsula, as individuals from Spain were placed within the same genetic clusters as with the UK, indicating admixture. Spanish populations, alternatively, might have undergone a southward recolonisation sweep from the UK to northern Spain. In regards to future climatic changes, Iceland and Kent are of particular concern due to their genetic isolation and low genetic diversity found within these populations, which might contribute to reduced population viability. Conversely, UK and Spanish populations exhibited high genetic diversity, allowing flexibility for these populations to adapt to environmental variation.

Jackson A (2016) The effects of past, present and future climate change on the red algae Corallina officinalis within the North Atlantic. A thesis submitted for the partial fulfilment of the requirements for the degree of Master of Science at Imperial College London. Supervised by Juliet Brodie & Chris Yesson. (PDF)

An article based on this work was published here. 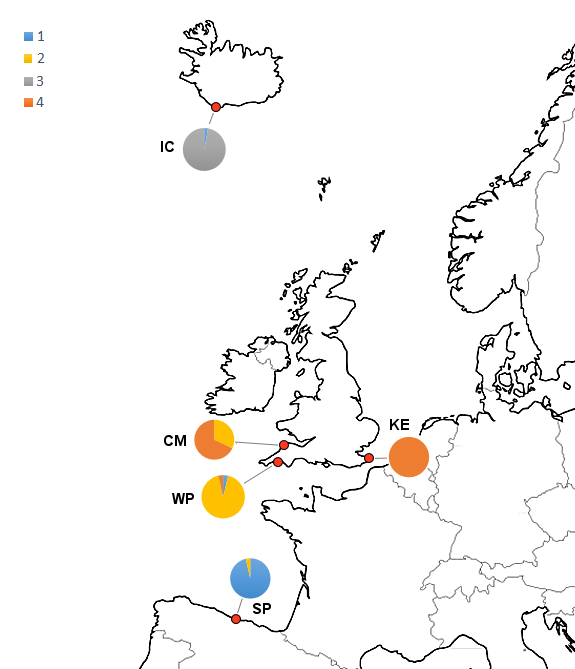 Pie charts representing the genetic cluster composition (k = 4) of the 5 populations sampled. Pie graphs indicate the number value of individual from each population assigned to the cluster. Colours indicate the assigned cluster(s).

One thought on “The effects of past, present and future climate change on the red algae Corallina officinalis within the North Atlantic”