The executive summary from a report for the Crown Estate detailing the results of a project to examine drivers of change in seaweed abundance around the UK.

There have been an increasing number of reports of changes in abundance of large brown kelp and wrack seaweed species around the British Isles in the last decade, with declines reported in the south for kelp species and increases in northern and central areas for some kelps and wracks. Accordingly, effort has been made to determine the extent and drivers of change in the region. This study examines recent-past (1960s to the early 2000s) changes in the marine environment around the British Isles in order to determine the drivers of change in seaweed abundance previously documented.
Numerous sources of marine environmental data were explored for potential use in this project, including direct observations made by governmental agencies, satellite derived data, and hind-cast model simulations. Each were examined to identify those that best matched a previously compiled dataset on seaweed abundance over the period 1974-2010, for the maximum possible number of parameters. Hind-cast model simulations provided the best spatial and temporal coverage in relation to the seaweed abundance dataset for numerous environmental parameters (temperature, salinity, dissolved oxygen and nutrient concentrations, productivity indices and light attenuation), and thus were used in this study to determine i) the general abiotic environment prevailing around the British Isles over the recent-past, ii) long-term trends in environmental parameters, iii) the velocities and direction of change, and iv) the drivers of change in abundance for 14 species of large brown kelp and wrack seaweed.
The results revealed distinct environmental regimes across regional seas (biogeographic boundaries defined by the Joint Nature Conservation Committee) around the British Isles, over which the brown seaweed species are distributed. Sea surface temperature increases were evident in all regions from 1967 to 2012, with a greater rate of increase from the mid-1980s onwards and greater warming in cooler regions. In contrast, long-term (1967-2004) declines in all other environmental parameters were identified, though were reduced or absent in more recent decades (1984-2004).
Theoretical velocities of change highlighted potential rates of migration required to sustain desirable environmental conditions over the study period (~ 1-11.8 km yr-1 over 1967-2004). All environmental parameters simultaneously showed an advance in the velocities required to keep pace (up to 23-35 km yr-1 over 1984-2004), and vast areas of the British Isles, including significant coastal regions of the North Sea and Irish Sea, have experienced significant changes in marine environmental conditions, in excess of the overall variability in the marine environment apparent over the NE Atlantic.
Significant relationships were identified between brown seaweed abundance and all environmental parameters investigated, though relationships were varied, complex and ill-defined, reflecting problems associated with the limited abundance data. Strongest predictions of abundance were apparent for Sargassum muticum, Himanthalia elongata, Laminaria ochroleuca and Alaria esculenta. Across all species, data indicated that seawater warming may have promoted seaweed abundance over the recent-past, though the strength of relationships was generally weak.
We recommend establishing and maintaining long-term monitoring of seaweed populations around the country, employing consistent and rigorous methodologies throughout to permit comparisons of change in different regions, and integrating observations with monitoring of potential drivers of change.

Williamson C, Yesson C & Brodie J (Dec 2015) Determining the causes of changes in abundance of the large brown seaweeds of Britain. A report for the Crown Estate. (PDF) 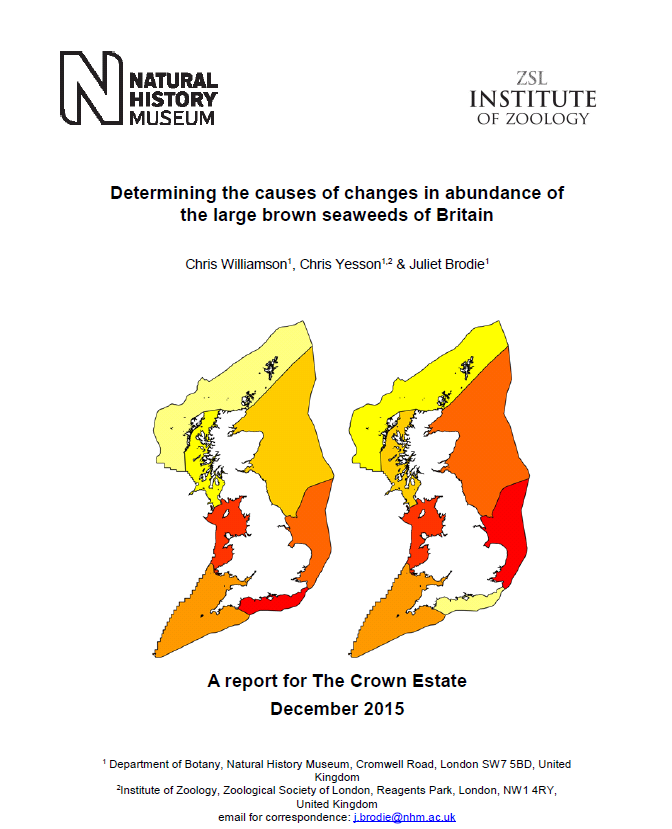